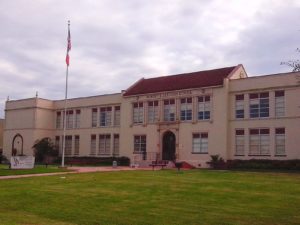 Robert E. Lee Senior High School – TEA Academically Recognized Campus, originally a $3.5 million facility, opened in the fall of 1961 under the leadership of Mr. Leslie R. Hinds. The building was to accommodate approximately 2200 students even though less than 2000 students were enrolled in the fall. The high school housed four grade levels: freshman, sophomore, junior and senior.

The feeder system for Lee includes – Alamo and Abell Junior High Schools, and includes, but is not limited to, the following elementary schools: Jones, Scarborough, Rusk, Parker, Fannin, Bowie, Crocket, Burnet, and Bonham.

The new facility consisted of seven pods or sections that were designed around a central courtyard. An interesting note is that when the school opened, there were no doors on the classrooms, and only doorways.

Midland Lee won three consecutive 5A state football championships, the first school to ever accomplish that feat. The 1999 season marked an undefeated national championship awarded by the Associated Press. In the span of those three years Midland Lee went 43-3. The Rebels were led by tailback Cedric Benson and coach John Parchmann.